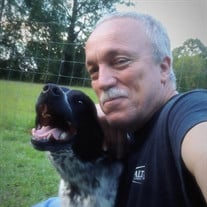 William Robert Carlin, 67, of Havana, FL, passed away at home on February 23rd, 2022 after a determined fight against an aggressive cancer. William (known as Bill) was born on April 20th, 1954, in Sarasota, Florida, to the late Hubert and Margaret (Gurnee) Carlin. He was a member of the International Holiness Pentecostal Church. Bill was always a hard worker and a get-it done sort of guy. He earned “Sharpshooter” and “Marksman – First Class” qualifications while still in high school and started his first business as a window washer at age 16. He was a dirt bike racer and enjoyed riding his horse, but his first love was always photography and anything to do with flying. When Bill graduated from Sarasota High School, he joined the Sarasota Fire Department where he was a fireman for 13 years working his way up to lieutenant. Two of those years he served an EMT with the department. In 1977, he met Becky and her 8-year-old son, David and in 1978, they married and moved to Flagstaff, Arizona. In Flagstaff, the family had their first opportunity to act in community theater. Bill greatly enjoyed watching as a helicopter film crew hovered over the Grand Canyon to film David in a Bell and Howell commercial. Bill went on to be in several community theater plays over the years as he really enjoyed acting. It was in Flagstaff that Bill developed a great love of the west. He revisited Arizona in the last few years to take some amazing photographs of the Grand Canyon, Monument Valley, and other sites. As a Florida native, he was delighted when it snowed the last time he was there. Bill is survived by his wife, Becky; stepson David John Potts (Pam) and grandson, Jake Asher Potts; son William Robert Carlin II; daughter Cheryl Belleau; daughter Shelby Marie Carlin and granddaughter, Bella Marie Herring. As well as Thomas Veal (Jing), a nephew that was like a son to him, and his sister's sons Russell and Daryl (Julia) Presgraves. Bill was predeceased in death by his sister, Ann Presgraves. The family would like to thank Altrua Global Solutions - Melode and Skip Smelko, Bill’s employer, for their amazing care and support. They and all of Bill’s co-workers, with their continuing prayers, have comforted us more than they can know. Per Bill’s wishes, there will be a private family gathering later. In lieu of flowers, the family requests donations be made to Leon County Humane Society, an organization Bill cared greatly about and adopted three rescue dogs from. The family is being assisted by James Sircy and Jackie Fulford of Young Fulford Funeral Home.

William Robert Carlin, 67, of Havana, FL, passed away at home on February 23rd, 2022 after a determined fight against an aggressive cancer. William (known as Bill) was born on April 20th, 1954, in Sarasota, Florida, to the late Hubert and Margaret... View Obituary & Service Information

The family of William Robert Carlin created this Life Tributes page to make it easy to share your memories.

William Robert Carlin, 67, of Havana, FL, passed away at home...

Send flowers to the Carlin family.