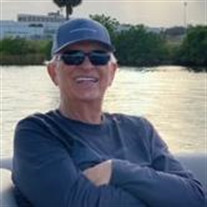 On November 29, 1938, William Eugene Whitlock, III, (“Buddy”) was born in Lake City, Florida. He passed away on July 4, 2020 surrounded by family. The second of three children, Buddy grew up in High Springs and Perry. He spent much of his childhood outdoors and loved fishing and playing baseball. His father, Gene was a state representative from Alachua County, and Buddy served as a legislative page as a boy. Buddy attended Taylor County High School in Perry where he starred on the football and baseball teams and voted best looking in his senior class. He graduated in 1956, and then briefly attended the Citadel in Charleston, South Carolina, before returning home and joining the United States Army. In the Army, Buddy served as a dental technician while stationed in St. Louis, Missouri. After his military service, Buddy returned to Florida. And to the dismay of his father, a proud and loyal Gator, Buddy enrolled as an undergraduate at Florida State University. There, he joined the Alpha Tau Omega fraternity, where he met many lifelong friends and became a loyal Seminole and supporter of the football team. After college, he attended law school at Florida State University, and graduated in 1971, a proud member of its third graduating class. Like he did wherever he went, in law school Buddy made countless friends who remained dear for the rest of his years. Admitted to practice in 1972, Buddy had a long and successful career as a trial attorney. In 1979, Buddy embarked on another adventure, moving to Quito, Ecuador on behalf of a client working on a large construction project in the city. He did not speak any Spanish at the time and did not pick up much. He did, however, forever change his life when he met Elsa there. As he frequently noted, she took his breath away and within seven months she was his wife. Soon thereafter, Buddy and Elsa moved back to the United States and he resumed his law practice as they built a life together. In 1986, Buddy moved to Tallahassee, where he practiced law ever since. Over a legal career spanning nearly 50-years, Buddy helped countless clients deal with countless problems mostly in family law matters. He served his clients well and was a passionate advocate for those he represented. Although skilled in all aspects of the legal practice, Buddy was most at home in the courtroom. He thrived on the pressure and intensity of trial and took pride in never backing down to anyone. When he wasn’t fighting for his clients, he could often be found the golf course. Buddy was an avid golfer, and a good one. He travelled the world with friends to play, taking trips to Scotland and the Dominican Republic. And even in his later years he could outdrive golfers half his age. He didn’t brag much about his game, but he did keep a plaque with each of his four holes-in-one on his wall. More than anything, Buddy was a friend to many and the life of every party. A gifted storyteller, he could captivate an audience with countless tales from a long life well lived. He loved crossword puzzles, reading, and travelling, especially to Peru where he loved the food. He was always well-dressed and was in remarkably good shape into his eighties. Preceded in death by his parents, William Eugene Whitlock, Jr., Carolyn Holt Whitlock, and his siblings James Holt Whitlock and Mary Carolyn Puckett. He is survived by his wife Elsa and daughter Ashley Terry, son William E. Whitlock IV, and daughter Paige Hering, ten grandchildren, and one great-grandchild. He will be missed by all including his many close friends. Service with Military Honors and interment is scheduled for Friday July 24, 2020 at 10:00 a.m. at the Tallahassee National Cemetery. The following day, Saturday July 25, 2020 and 2pm, friends and family will celebrate Buddy’s life at one of his favorite places, Golden Eagle Country Club. The family is being assisted by Skip Young, and cared for by Jackie Fulford of Young Fulford Funeral Home and Crematory, Tallahassee, Florida. (850) 610-4444 YoungFulford.com

The family of William "Buddy" Whitlock III created this Life Tributes page to make it easy to share your memories.

Send flowers to the Whitlock family.