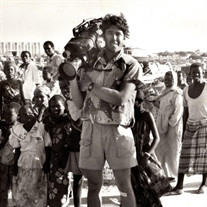 William Briggs Goddard (April 3, 1956—March 14, 2021) William Briggs Goddard died unexpectedly in his sleep at home in Tallahassee, Florida on March 14. He was 64, just three weeks shy of his birthday. His many friends and co-workers express a shared sentiment, that “Briggs was a calm, gentle soul with a quirky sense of humor”. His button collection was emblematic of his unique sense of humor. He wore a different button every day with sayings, such as, “I can tell people are judgmental just by looking at them” or “Infinity…. will it ever end?” Born April 3, 1956, in Russellville, Kentucky, Briggs was the youngest of three children of Russell and Jean Goddard. After his older siblings left home for college and careers, Briggs moved with his parents to Bowling Green, Kentucky, about 30 miles away. Briggs, who then was about 12, finished public school there, graduating from Warren County Central High School in 1974. He joined the Air Force in 1975, serving first at Nellis AFB near Las Vegas, later at Homestead ARB in southern Florida, and finally in the Philippines at Clark Air Base near Manilla. After his discharge, Briggs made a cross-country trip on his motorcycle to Tallahassee, where his sister was then living. Briggs enrolled in Florida State University, earning a degree in media production. In the first years of his career, Briggs worked for WFSU-TV in Tallahassee for today’s FLORIDA Channel. During legislative sessions, he operated cameras for public television’s extensive stream of live coverage of public affairs. He also crewed on WFSU’s long-running “Florida Crossroads,” an award-winning, documentary series that looks at people, places, and events shaping Florida. After leaving WFSU, Briggs plunged into his freelance career. Much of his work involved crew-ing on live coverage of sports events, often of Florida State University games. He also crewed on numerous NFL games. Briggs worked frequently on news crews covering national and regional political affairs, inter-views, and other news events. His work often involved news documentaries and special events. One such event was the 50th anniversary in 1994 of the D-Day invasion of Europe by Allied troops. This event had personal significance for him: his father, Russell Goddard, landed on Utah Beach during the second hour of the invasion on D-Day, June 6, 1944. His experience of the solemn anniversary ceremony at Normandy strongly bonded father and son. On another major assignment, Briggs accompanied Secretary of State Hillary Clinton to Somalia in August 2009 to document the humanitarian plight of refugees. Briggs is survived by his sister, Jana Goddard (Wes Todd) of Thomaston, Maine, their children, Wiley and Chris Todd, and their grandson, William Todd; and by his older brother, Ken Green (Ellen) of St. Paul, Minnesota, and their children, Nora and Jesse, and grandson Max Rahe. Briggs enjoyed being with friends, family, his cats, sharing music and movie trivia, attending live concerts, cruising on his motorcycle, and relaxing in his pool. His favorite song was Leonard Skynyrd’s “Free Bird”. Briggs, we hope you are now a free bird. A Memorial Service for Briggs, with Full Military Honors, will be held on Friday, April 9, 2020 at 2:00 PM at the Tallahassee National Cemetery. This service will be livestreamed with the links provided on this tribute page. Gifts in Briggs’ memory may be made to Goose Creek Wildlife Sanctuary at The family would enjoy reading comments you leave about Briggs on this tribute page, so please feel free to share your memories. The family is being assisted by James Sircy and Jackie Fulford at Young Fulford Funeral Home and Crematory, Tallahassee, FL. 850.610.4444 YoungFulford.com

Send flowers to the Goddard family.