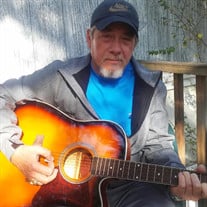 Terry Alday passed away Tuesday September 17, 2019, at Tallahassee Memorial Hospital following heart surgery. Terry grew up around Donaldsonville Ga. He spent most of his adult life in the Dothan area, after his retirement he moved to Albany Ga. Terry was many things to many people; produce man, welder, truck driver, friend, brother, son, uncle, cousin, and a loving father. Terry never met a stranger. The perfect day for him was sitting around a fire playing his guitar, or with a cold beer in his hand, singing and laughing with friends and family. Though much of his life was hard Terry’s heart remained soft. When Terry decided to love it was never ending, and he loved with every inch of himself. He touched the hearts of so many and left his imprint on those he loved. The world is certainly a better place for having his influence. Terry is survived by two sons, Alex Alday, and Justin Mosier, one daughter, Nona Delgado, two brothers, Charles and Joseph Alday, four sisters, Sarah Alday, Jackie Bryant, Mary Carter, and Peggy Maples, stepmother Dorothy Bryant, six grandchildren and several nieces, nephews, aunts, uncles, cousins, and friends. The family invites all who wish to attend a Remembrance of his life to join them October 6, @12:00 pm, at the Senior Center in Ashford Al. Please bring any pictures, memories, stories or laughs you would like to share. Lunch will be served along with any covered dishes you wish to bring. Your pictures you may take home, but the memories, stories, laughs, and food will be shared by all. The Family is being assisted by Skip Young and James Sircy, and cared for by Jackie Fulford.

Terry Alday passed away Tuesday September 17, 2019, at Tallahassee Memorial Hospital following heart surgery. Terry grew up around Donaldsonville Ga. He spent most of his adult life in the Dothan area, after his retirement he moved to Albany... View Obituary & Service Information

The family of Terry Jan Alday created this Life Tributes page to make it easy to share your memories.

Send flowers to the Alday family.