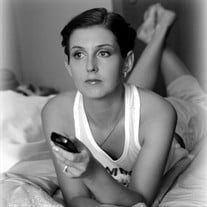 Svetlana Palamodova Rolston, 42, passed away on September 19, 2021. Svetlana was born in the City of Leningrad, Soviet Union on September 7, 1979. Leningrad is presently known as Saint Petersburg, Russian Federation. During her early life she decided to study Ballet and trained for many years at the Imperial Mariinsky Ballet School, while continuing to excel at her academic studies. By the time Svetlana was 18, she had completed a Bachelor of Arts in International Relations at Smolny University, Saint Petersburg, Russia. She also spoke Russian, English, German and some French. It was at that time that she decided to stop pursuing a career in Ballet and become an Academic. While enrolled in a Master Degree program in International Relations at Smolny University, Saint Petersburg, Russia, she won a scholarship to study at Yale University School of Medicine, School of Epidemiology, New Haven, Connecticut. She met Paul, a fellow student, at Yale University School of Medicine and completed her Master’s Degree in Epidemiology, Public Health in September of 2002. She continued to work in Public Health, developing a specialization in the epidemiology of multi-drug resistant tuberculosis (MDR-TB) and the human immune virus – Acquired Immune Deficiency Disorder (HIV-AIDS). She worked intermittently for Yale University, the Biomedical Center of Saint Petersburg, the World Health Organization (WHO) and the Red Cross. She married Paul in 2005, and the joy of her life, Alisa Angelina Rolston was born on July 19, 2007. In 2006 a family decision was made to support the United States in the War against Terror. The family endured many military moves, lived all over the country and travel widely. They also endured many prolonged difficult military separations to include the Wars in Afghanistan, Iraq and the War Against ISIS (Syria-Iraq). Svetlana will be remembered for her brilliance, wit, beauty, love and commitment to her daughter. She is survived by her Father; Stanislav Petrovich Palamodov; Mother, Galina Stepanovna Palamodova; Brother, Steppan Staislavovich Palamadov and of course, Paul and Alisa. There will be a service in the Saint Petersburg Russia, where she will be buried on her family plot next to her relatives, as well as a service at the Tallahassee National Cemetery; October 22, 2021 at 2 pm The family is being assisted by James Sircy and Jackie Fulford of Young Fulford Funeral Home and Crematory, Tallahassee, Florida. 850.610.4444 YoungFulford.com

Svetlana Palamodova Rolston, 42, passed away on September 19, 2021. Svetlana was born in the City of Leningrad, Soviet Union on September 7, 1979. Leningrad is presently known as Saint Petersburg, Russian Federation. During her early life she... View Obituary & Service Information

The family of Svetlana Palamodova Rolston created this Life Tributes page to make it easy to share your memories.

Send flowers to the Rolston family.