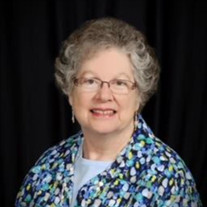 Susan Louise Moyer Poss, 75 years old, passed away at home on April 23, 2021, to a life in Paradise surrounded by family. Born December 30, 1945 in Oakland, California, Susan (Sue) was the daughter of Gordon Dewey Moyer and Marian Mayhew Moyer. Sue's first home until age 4 was Shadelands Ranch, where her father and grandfather worked as managers. Shadelands Ranch is currently a museum for the local area of Walnut Creek, CA. The family later made a series of relocations and finally settled in Lake Tahoe, CA. Sue graduated from Tahoe Truckee High School in 1963 and later attended University of California Davis and Sierra College. After changing her college major, she attended Chico State College where she earned a Bachelor of Science in Nursing. She completed her final year of practical training at Travis Air Force Base where she met James Poss, Jr. (Jim) who had been stationed at that facility. They later became engaged and then married on June 21, 1969. After graduating from Chico State, Sue and Jim moved to South Florida where Jim was later accepted into the Florida Highway Patrol Academy in Tallahassee. While living there, Sue worked at Tallahasee Memorial as a charge nurse in the OB/GYN department. Jim graduated from the academy in 1969 and the couple relocated to Miami where Jim had been assigned and Sue worked as a Labor and Delivery nurse at Doctors Hospital. In 1976 she transferred to South Miami Hospital and later becoming head nurse in the OB/GYN department. She remained at SMH until 1995 where she had also worked as a Diabetic Educator, Wound Care and Oncology nurse. That year, Sue and Jim retired. Over their years together, Sue and Jim developed a passion for RVing and joined local chapters of camping groups. After retirement, they had planned for full time RV life and their adventures included 7 cross country trips with extended stays in favorite spots including North Carolina, Maine and Florida. In 1999, after changing their plans for the future, Sue and Jim built a new home in Havana, FL where they eventually settled. They continued to spend their summers living in their motorhome at Lake Toxaway, NC. Since settling in Havana, Sue had been an active member of First Baptist Church of Quincy, FL where she enjoyed Sunday School and Bible Studies. Throughout her full and productive life, she suffered with Type 1 Diabetes since the age of 19. At age 37 she began her long battle with complications resulting in multiple procedures and surgeries, including a 5-way bypass in 2009. In her last four years of life, she had five major hospitalizations. In October 2020 she had a major heart attack, which led to her being homebound and under Hospice care. In November, Jim and all their children and grandchildren gathered for a Living Memorial at their home in Havana, FL. During that time she maintained her wit and sense of humor, smiled often, shared memories and loved being surrounded by all her family. She enjoyed the many cards and calls she received from friends and family. Sue was preceded in death by her parents and grandaughter, Julia Marie Wrves. She is survived by her husband Jim of 51 years, two grown children, Jennifer Poss Wrves (George) and Robert James Poss (Julie Peterson), four grandchildren, Lauryn Marie Poss, Adriana Rosa Wrves, Andrew James Poss, and Nicholas Alexander Wrves, brothers Warren Mayhew Moyer and William Gordon Moyer, and many neices and nephews. We are so grateful to for the loving care of Big Bend Hospice and their home care staff. At this time, no plans for services have been made. Skip Young and Jackie Fulford of Young Fulford Funeral Home and Crematory provided for her final care. www.YoungFulford.com.

The family of Susan Moyer Poss created this Life Tributes page to make it easy to share your memories.

Send flowers to the Poss family.