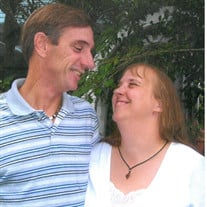 Scott Raymond Presley, 59, of Madison, Florida, passed away on November 26, 2020 with his loving wife by his side. Scott was born to Leslie ("Les") Robert and Mary Ellen Presley on December 4, 1960 in Rochester, New York. Scott lived at various times in New York, California, Canada, and finally Florida where he met the love of his life, Angela Maria Adams. Whenever possible, he would load up in one of his campers with Angela, and they would set out to soak up the beauty of new places. They loved traveling together and often took nature and history camping trips, ultimately camping in a dozen US States and Ontario, Canada. State Parks provided their most favored camping sites. All of the campers they used were upgrades or creations of his own hand. When it came to hobbies Scott's true passion was tinkering with things, welding and creating something using all of his skills, of which he had many. He was highly creative, exceptionally talented, he always had a project to work on. Scott was definitely a "Jack of All Trades," and it seems there was nothing he could not figure out. He would spend hours teaching himself to fix and create just about anything. He either redesigned or self-built every farm or shop implement he came across. When his friends had something that was not working correctly, Scott was the one they would call upon for assistance. He enjoyed helping people in any way that he could, especially around the hunting camp. Angela will miss Scott terribly. She never dreamed she would lose him so soon. But when they were together they made some awesome memories and had some awesome adventures. She will treasure those for the rest of her life. They were together 12 years, married 11 years. Scott is survived by his wife, Angela Adams of Madison, FL; his brothers Kevin Presley (Wife Jan) of Live Oak, FL. Brother Shane Presley and sister Krista Presley Heath of Ontario, Canada; mother-in-law Paula Adams and brother-in-law Jim Adams (Wife Teri) of Madison, FL; several nieces and nephews; and his dogs. Scott was preceded in death by his parents, Les and Mary Ellen Presley; and father-in-law Tom Adams. A celebration of life will be planned at a later date. In lieu of flowers, the family requests donations be made in Scott's name to the Lee, FL Chapter of the Suwannee Valley Humane Society (850) 971-9904. The family is being assisted by Skip Young and cared for by Jackie Fulford at Young Fulford Funeral Home and Crematory, (850) 610-4444 YoungFulford.com.

Scott Raymond Presley, 59, of Madison, Florida, passed away on November 26, 2020 with his loving wife by his side. Scott was born to Leslie ("Les") Robert and Mary Ellen Presley on December 4, 1960 in Rochester, New York. Scott lived at various... View Obituary & Service Information

The family of Scott Raymond Presley created this Life Tributes page to make it easy to share your memories.

Scott Raymond Presley, 59, of Madison, Florida, passed away on...

Send flowers to the Presley family.