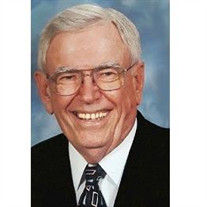 Ronald Dale Taylor (Maverick, Mr. Goodbar, Captain) was born May 20, 1934 in Columbus Ohio to Vaughn L. and Dorothy Jane Taylor. He graduated home to be with his Heavenly Father on September 11, 2019. He passed peacefully at home, surrounded by family. After school he proudly served in the U.S. Navy aboard the USS Sperry. His honors included receiving both a National Defense and a Good Conduct Medal. Following his honorable discharge, Mr. Taylor made a long successful career in the insurance industry after a gentleman in the business, S.G. Kimbrow, saw his character and likable good nature, and said “I’m going to give this guy a shot” and with that shot Mr. Taylor obtained and held his state license, attended continuing education classes every two years, and sold insurance in the state of Florida, up until his 83rd birthday. He worked hard to make certain his love and wife of 65 years, Jan, and his daughters were well taken care of. He loved his time singing in the Celebration Baptist Church Choir. He was a member of the Bible Study group (Saints Alive), and was more recently a member of the Deer Lake United Methodists Church. He served as a volunteer in numerous ways at church and beyond. Several years he served for the church’s live nativity scene. He was a volunteer for hospice and of course loved and served everyone. He gave more life than he took...always. Above all this however, he loved the Lord, his wife, and family and served them well. He truly was an officer and a gentleman, even though they called him a maverick back in the day! He is survived by his wife, Janet L. Taylor; daughter Yvonne Sixma and her husband Stony Sixma; daughter Tammy Langston and her husband Danny Langston; his son in law Terry Henderson; his brother Bob Taylor; and his grandchildren, Chance and his wife Bri, Taylor and his wife Leah, Lee, and Daniel. He was predeceased in life by his parents, his daughter Bonnie Henderson, and Bonnie’s son/his grandson, Chad Henderson. In lieu of flowers, the family is requesting that a Love Gift be made in honor of Mr. Taylor to Big Bend Hospice. A Celebration of Ron Taylor's life, and burial thereafter, will take place at 12 noon on Friday, September 20, 2019 at the Tallahassee National Cemetery. The family is being assisted by Skip Young and cared for by Jackie Fulford of Young Fulford Funeral Home and Crematory, Tallahassee, Florida.

Ronald Dale Taylor (Maverick, Mr. Goodbar, Captain) was born May 20, 1934 in Columbus Ohio to Vaughn L. and Dorothy Jane Taylor. He graduated home to be with his Heavenly Father on September 11, 2019. He passed peacefully at home, surrounded... View Obituary & Service Information

The family of Ronald Dale Taylor created this Life Tributes page to make it easy to share your memories.

Send flowers to the Taylor family.