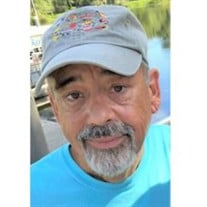 Ron "Pop" Miller, 65, of Tallahassee, Florida, passed away unexpectedly at SHANDS Hospital in Gainesville, Florida on February 23, 2020. Ron Miller proudly served our Country in the United States Army where he was the recipient of the good conduct medal. He was employed by the Leon County School Board for 27 years. He was a genuinely kind and considerate man, always thinking of others before himself. Ron Miller is the proud father of three children whom he raised as a single father after losing his wife of 30 years, Janet Miller, who passed away some 20 years ago. Ron is survived by his daughters, Tara Walters (Sam Walters) and Kelly Miller (Ian Rogers), and son Allen Miller (Leslie Miller). He was an absolutely amazing "Pop" to his six beautiful grandchildren, Logan, Cheyenne, Dustin, Caleb, Trenten, and Aiden. Ron is also survived by 4 sisters, Angel Miller (Mark), Cindy Duffany (Walt), Darenda Bianco (Larry), and Peggy Carey (Bill); 4 brothers, Bob Miller (Susan), Ray Miller, Ruben Gardner (Amy), and Larry Crews; and numerous nieces and nephews whom he loved very much. Ron loved his wife more than anything in the world. When she passed away at such a young age he never remarried and focused solely on his children, and thereafter his grandkids. In his spare time Pop enjoyed watching western movies, gardening and eating ice cream! If anything broke, Ron could take care of it - a true modern day Mr. Fix It! When it came to his grandkids, which he considered his prized possessions, Pop did it all including taking them to their activities, making sure they had all of the necessary sports equipment, playing with them, watching over them while their parents worked, and otherwise spoiling them rotten. Ron Miller is missed terribly by his children and grandchildren who cannot imagine their lives without their "Pop". The family will receive friends from 10:00 AM to Noon on Friday, March 6, 2020 at Harvey Young Chapel, 3106 Crawfordville Highway, Crawfordville, Florida. Following the visitation, the Patriot Riders will provide escort to the Woodville Cemetery, where Ron will be laid to rest with full military honors by the Big Bend Honor Guard. Finally, Ron Miller will rest in peace with his beloved Janet at his side. The family is being assisted by Skip Young in making arrangements, and is being cared for by Jackie Fulford. (850) 610-4444 YoungFulford.com

Ron "Pop" Miller, 65, of Tallahassee, Florida, passed away unexpectedly at SHANDS Hospital in Gainesville, Florida on February 23, 2020. Ron Miller proudly served our Country in the United States Army where he was the recipient of the good... View Obituary & Service Information

The family of Ronald A. Miller created this Life Tributes page to make it easy to share your memories.

Send flowers to the Miller family.