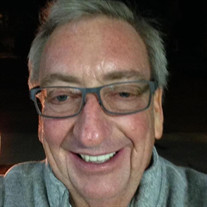 Robert Lee Treharne, Jr., 61, passed away unexpectedly on Friday, April 24, 2020 at Capital Regional Medical Center in Tallahassee, FL. Robert was born on August 7, 1958 in Jamestown, New York to Robert Lee Treharne, Sr. and Patricia (Doley) Treharne. Following high school, Robert enlisted and proudly served our Country in the United States Air Force as a Missile Mechanic. Robert had a career that allowed him to serve in a variety of roles, including being a licensed realtor in Florida; he owned a detail company in Clearwater, Florida; after relocating to Tallahassee he worked at the Southwood Golf Course, and thereafter as a supervisor for Star Metro Transit; and most recently, Robert opened a new business, Greenskeeper, LLC. Robert was a parishioner at Blessed Sacrament Catholic Church in Tallahassee. He was known for his kind heart and playful nature. Robert loved the outdoors, his pets Maya and Josie, and most of all, his loving wife, Vivienne. Robert is survived by his wife Vivienne LaMarre Treharne; his mother Pat Treharne; brothers John Treharne and David Treharne (wife Amelia); nephew Dave Treharne; father-in-law Raymond Lang (wife Mitchlyn); longtime friends John Owen (Jennifer); and a host of additional family and great friends. He was preceded in death by his son Christopher Lee and his father Robert Lee Treharne, Sr. In lieu of flowers, the family is requesting contributions in the name of Robert Lee Treharne, Jr., to the Blessed Sacrament Catholic Church. Please contact the church at (850) 222-1321 or https://bsctlh.com/ A memorial service at Blessed Sacred Catholic Church will take place on Wednesday, August 12th, 2020 at 12:00 noon with the burial following at the Tallahassee National Cemetery at 2:00 p.m. The family is being assisted by James Sircy and cared for by Jackie Fulford at Young Fulford Funeral Home and Crematory.

The family of Robert Lee Treharne Jr. created this Life Tributes page to make it easy to share your memories.

Customized sympathy cards. Mailed for you.