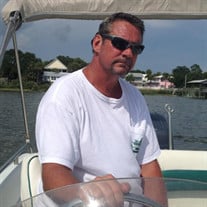 Richard Jay Rice was born August 22,1962 in Erie, Pennsylvania. He passed away on April 24, 2022 in Tallahassee, FL after an extended illness. He was preceded in death by his mother, Patricia Pauline, and father, Richard James Rice. Richard leaves behind his children, Amanda Marie Sauls (Sam), Richard Jarrett Rice of Tallahassee and his sister, Leigh Raye Rice of Boynton Beach, FL. He is also survived by his stepchildren, Miles Bryant (Andrea), Hunter Vincent (Meghann) and Halee Shemane Hollis. He will be greatly missed by all. Richard was a gifted athlete. Playing sports in his early years and serving as a baseball closer for the University of Florida, he was once known as Richard “The Train”. He was also a walk-on for the University of Florida football program. He took delight in sharing the story of how he missed a tackle on national TV, where the infamous Hershel Walker got the best of him! Richard was drafted by the Baltimore Orioles, where he was a pitcher for seven years. He also had a short run with the Tampa Bay Bucs. Living in Tallahassee for most of his adult life, Richard worked for the Leon County Sheriff’s Department and later for the Office of Court Administration. Richard was a true outdoorsman. He had a passion for anything outdoors, including hunting, boating, motorcycles; and, in his last years, spending time in his mountain home in Young Harris, GA. He was known for his quick wit and keen sense of humor, which was uplifting to all who knew him. A celebration of Richard’s life will be announced at a later date. The family is being assisted by James Sircy and Jackie Fulford of Young Fulford Funeral Home.

Richard Jay Rice was born August 22,1962 in Erie, Pennsylvania. He passed away on April 24, 2022 in Tallahassee, FL after an extended illness. He was preceded in death by his mother, Patricia Pauline, and father, Richard James Rice. Richard... View Obituary & Service Information

The family of Richard Jay Rice created this Life Tributes page to make it easy to share your memories.

Send flowers to the Rice family.