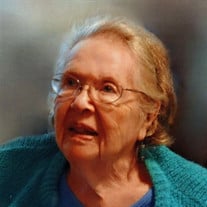 Pat A. Ingham, 91, passed away from Alzheimer’s at home April 10, with her loving husband Kenneth holding her hand and her daughter Donna nearby. She was born January 7, 1929, in Oakland, California, to David Laurie McGregor of Slamannan, county of Stirling, Scotland, and Lillian (Nickel) McGregor of Fargo, North Dakota. She had her mother’s auburn hair and her father’s gutsy “try anything” nature. Having finished Gresham High School outside of Portland Oregon, she went on to graduate from the University of Oregon where she met and married Charles Lloyd Dwigans. They had two children, Donna Marie (Liewer-Cohen) and Robert Charles Dwigans. After their divorce in 1962, Pat learned to drive (and later to fly gliders), and went from full-time mother and seamstress to junior high school teacher. To better support her children, she attended Portland’s Reed College where she got her Master’s in psychology with a second emphasis in ancient history. She could quiet a room of 30 rambunctious 7th graders simply by lifting one eyebrow, although her own kids claimed the technique didn’t work on them. Intensely creative, she was an accomplished artist in many media. Over the years, various galleries showcased her oil portraits and kiln-fired enamel jewelry done using techniques developed by early Egyptians. She was a member of the Northwest Chapter of the Florida Society of Goldsmiths, Tallahassee Watercolor Society, and the Tallahassee Polymer Clay Art Guild. Once when something broke, her then-preschool grandson Chris (Liewer) said, “It's okay - Grandma Pat can just make another one out of polymer clay.” In 1978 she met Erland M. Jensen, to whom she was happily married for 24 years. After she retired from teaching in Canby, Oregon, they moved to Crawfordville, Florida in 1987. She announced she was “born to be retired” as she threw herself into learning computer design embroidery as well as other art forms. After Erland died in 2003, she thought the best part of her life was over, but she was wrong. Determined to make new friends among other ladies at the Tallahassee Senior Center, she was surprised when Kenneth L. Ingham, Jr, held a chair out for her at the Valentine’s Day function. The rest, as they say, is history. In 2004 they had two weddings, one at the home of Ken’s daughter Kathleen and the second at LakeTalquin Park where she wore her trademark blue jeans and pearls. She was 75 when she realized she had finally found her best friend. In speaking of her beloved husband Ken, she often declared that these were the happiest years of her life. As a retired Master Sergeant in the United States Airforce, he had traveled to many of the places she taught about but had never had the opportunity to visit. Through his stories she enjoyed the world. Through his love, she also instantly gained three more children: Kenneth Ingham, III (Diana), of Albuquerque as well as Kathleen Ingham Tailer (Jim) and David Ingham of Tallahassee. By way of Kathleen and Jim, “Miss Pat” also had her life blessed by eight more grandchildren: James Tailer, Bethany Pelts (Daniel), and Keandra, Jessica, Nathan, Joshua, Anna, and Megan, all Tailers. A special gift is great-grandson Joshua whose curly hair and sparkling brown eyes she adored. She spoke fondly of her 23 years as a teacher. “I was often exhausted, but never bored,” she claimed. She also opined that, “All children would rather grow up to be chimpanzees but the job of adults is to civilize them sufficiently that they could enjoy tea with the Queen of England.” One of her favorite geography lessons was making Italy-shaped pizza with her students. “Once you have eaten Italy you’ll never forget how to find it on a map,” she declared. Pat estimated she taught 3,500 7th and 8th graders how to discern the differences among the concepts of true, false, and opinion. Stacked head to toe, those children would be about the height of Mount Kilimanjaro. As she would say, go look that up. A private service to celebrate this remarkable woman will be scheduled later. In the meantime, she would urge you to spend creative time with a child. The family is being assisted by James Sircy and cared for by Jackie Fulford of Young Fulford Funeral Home and Crematory, Tallahassee, Florida. (850) 610-4444. YoungFulford.com

Pat A. Ingham, 91, passed away from Alzheimer&#8217;s at home April 10, with her loving husband Kenneth holding her hand and her daughter Donna nearby. She was born January 7, 1929, in Oakland, California, to David Laurie McGregor of Slamannan,... View Obituary & Service Information

The family of Pat A. Ingham created this Life Tributes page to make it easy to share your memories.

Pat A. Ingham, 91, passed away from Alzheimer’s at home April...

Send flowers to the Ingham family.