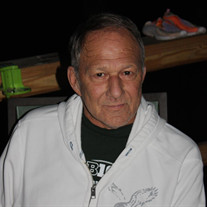 Nick Jay Kelly was born to Russell Wayne Kelly and Sondra Lee Kelly on June 5, 1950 in Lansing, Michigan. Nick passed away on December 16, 2020, in his hometown of Tallahassee. He was a young 70 years old. Nick was blessed to have plenty of playmates as a child, as he was the first of 9 children. He had 5 brothers and 3 sisters born after him. The kids grew up in Michigan and worked in the family owned automobile business. Following graduation from high school, Nick bravely served in the United States Marines Corps. during the Vietnam War. No words can adequately describe the sacrifices he made during that time, nor the impact it had on his life. After his military service, Nick moved to California where he greatly enjoyed life on the west coast for several decades. As he grew older, Nick returned to Michigan where he continued his career in the automobile industry. When it came to his enjoyment in life, Nick had two true loves: sprint car racing and music. Watching high-powered race cars on dirt tracks was his favorite and Nick traveled all over the United States to follow his favorite cars and drivers. For Nick, there was no greater thrill than to go to the race track with his brothers Terry & Gary. Nick was a very outgoing person and could strike up a conversation about music with anyone he met. While he leaned towards rock and roll, he could discuss just about any musician in any genre and had the ability to find raw talent in many undiscovered artists. After he retired from the car business he started driving for Uber and loved meeting so many different people but his favorite was truly young adults and with his broad knowledge of music he surprised them all. He was also very proud of his 5 star rating! Nick truly loved his family and spending time with them going to races, concerts and family gatherings wherever they were held. Nick also volunteered for many charity events and enjoyed serving others. About six years ago, Nick moved to Tallahassee, Florida to be near his brother Terry. This gave Nick the opportunity to be a bigger part of the lives of Terry, his wife Mary, and all of their children and grandchildren. Although he never had children of his own, Nick had a big heart and loved spending time and connecting with kids. Fortunately for Nick, he was able to share a great deal of time with Terry’s four children and fourteen grandchildren. Uncle Nick became very popular with all of his nieces, nephews, great nieces, and great nephews. No matter what activities the kids were involved in, they could count on Uncle Nick being there to cheer them on. It brought him as much delight as it did the kids. Nick is survived by his loving brothers Terry Kelly (and wife Mary), Gary Kelly, and Steve Kelly; and sisters Stacy George (and husband Kevin), and Kris Conrad (and husband Bryan); numerous nieces, nephews, great nieces, and great nephews; Terry’s dog Boo Boo (whom Nick loved as his own); and many friends near and far. Nick was preceded in death by his father, Russell Wayne Kelly and mother Sondra Lee Serle, his brothers, Kurt and Ted and his sister, Marilyn . With his love for life and outgoing personality, Nick touched countless lives while here on Earth. Nick had a life changing experience with our Lord Jesus Christ and accepted the forgiveness, mercy and grace offered to him by the Savior who never gives up in His pursuit of those he loves. Nick now resides in heaven which brings comfort and joy to those who love him with the sound assurance of seeing him again. May all whom he loved store in your hearts the wonderful memories you shared with Nick, until you meet again. The family is being assisted by James Sircy and Jackie Fulford of Young Fulford Funeral Home and Crematory, 4948 Six Oaks Drive, Tallahassee, FL 32303. (850) 610-4444 Young Fulford.com

Nick Jay Kelly was born to Russell Wayne Kelly and Sondra Lee Kelly on June 5, 1950 in Lansing, Michigan. Nick passed away on December 16, 2020, in his hometown of Tallahassee. He was a young 70 years old. Nick was blessed to have plenty... View Obituary & Service Information

The family of Nick Jay Kelly created this Life Tributes page to make it easy to share your memories.

Send flowers to the Kelly family.