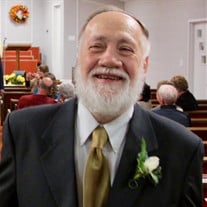 Marvin L. Teufel, 82, Topeka, KS, passed away on Tuesday, July 27, 2021, while visiting family in Tallahassee, Florida. Marvin was born January 1, 1939, in Sun City, KS the son of Alta Wiltshire and Francis Teufel. Marvin was a member of the Homestead Friends Church, Clements, KS. On January 1, 1961, Marvin married his soul mate, Madeline Hall, who he met when he was in 4th grade. They were married 56 years before her passing in June 2017. In the 1960s, he attended radio/television engineer training. After his schooling, KVGB in Great Bend, KS was his first professional job. In the late 1960s, he went to KFRM radio, in the Concordia, KS area. Next, he joined KSN television in Wichita, KS in 1971. After a few years at KSN, Marvin joined Beechcraft where he focused in aircraft parts cataloging. Marvin retired from Beechcraft at age 55. After a few years of retirement, he became the Road Master for Madeline for the last 10 years of her career, driving up and down the southeast with their poodles in tow. Survivors include; three sons – Jonathan (Jon) and Michele Teufel of Kansas City, KS, William (Will) and Theresa Teufel of Nickerson, KS, Marvin (Marty) and Heather Teufel of Tallahassee, FL; 5 grandchildren – Ashley, Christian, Grace, Jordan, and Mallory; two great grandchildren – Evan and Logan; 1 brother– Jim and Judy Teufel of Sweet Springs, MO; 2 sisters – Lela and James Patterson of Enid, OK, and Diana and Don Horner of Mulvane, KS; and numerous nieces and nephews. Marvin was preceded in death by his wife, Madeline Teufel, and his parents Alta and Francis Teufel. Memorial Service will be held at Pratt Friends Church, Pratt, Kansas at 11am on Thursday, August 12, 2021, followed by a lunch and an informal graveside service at Highland Cemetery in Medicine Lodge. Memorials in honor of Marvin Teufel may be sent to Helping Hands Humane Society, where he and Madeline adopted Dexter in January 2017. Their address is: 5720 SW 21st St., Topeka, KS 66604 http://www.hhhstopeka.org/ Please share your stories of Marvin on his Tribute Page, here on the YoungFulford.com website. Skip Young and Jackie Fulford are assisting the family. Young Fulford Funeral Home and Crematory, Tallahassee, FL 850.610.4444 YoungFulford.com

Marvin L. Teufel, 82, Topeka, KS, passed away on Tuesday, July 27, 2021, while visiting family in Tallahassee, Florida. Marvin was born January 1, 1939, in Sun City, KS the son of Alta Wiltshire and Francis Teufel. Marvin was a member of the... View Obituary & Service Information

The family of Marvin Lee Roy Teufel created this Life Tributes page to make it easy to share your memories.

Send flowers to the Teufel family.