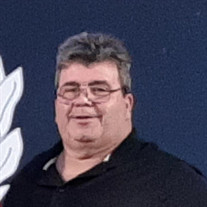 On Monday August 23, 2021, Jay Erkert, loving husband, father of 3 sons, passed away at the age of 58. Jay was born on May 8, 1963 in Sea Isle Crest N.J. to John and Joanne (Hyson) Erkert. He graduated from Wesley College where he played football and received his Associates degree in Marketing. Jay worked his parents bar called "Jack's Place" in Avalon N.J. for years as a bouncer and bartender. In 1993, Jay and his parents moved to Delray Beach Florida and then to Leesburg Florida shortly after that, where they opened up "3 J's Pizza" in Okahumpka Florida. Jay was also co-owner of "J's Pizzeria" in Tavares Florida. Jay was known for his famous New York/Jersey style pizza. He even made the front page of the food scene in the Daily Commercial newspaper. Everyone referred to him as "The Pizza Guy". On January 27, 2018, Jay married Tara Lynn Herndon and became step-father of 3 boys, Zachary, Nicholas, and Justin Herndon Jay loved football, especially the Philadelphia Eagles, and really all sports. He was on many fantasy teams. He loved to listen to sports talk radio and watching ESPN. He had a big heart when it came to cats and having a bunch of them. He loved to cook, especially pizza. On June 13, 2010, Jay was Baptized a Christian and became a follower of God. He said it was the best decision of his life. Jay is known for his big heart and bigger smile. He would give you the shirt off his back if you needed it. Jay was an all around great man, great husband, great father, and great son. Jay is preceded in death by his brother James Vincent Erkert. He is survived by his wife, step-sons, and parents. Jay's mother, Joanne Erkert, passed away a few days after Jay. A joint Memorial Service will be held on Sunday, September 26, 2021 at 2:00 PM, at the Celebration Baptist Church, The Plantation Plaza, 25327 U.S. 27, Leesburg, FL 34748. The family is being assisted by Skip Young and Jackie Fulford of Young Fulford Funeral Home and Crematory, Tallahassee, Florida. 850.610.4444

On Monday August 23, 2021, Jay Erkert, loving husband, father of 3 sons, passed away at the age of 58. Jay was born on May 8, 1963 in Sea Isle Crest N.J. to John and Joanne (Hyson) Erkert. He graduated from Wesley College where he played football... View Obituary & Service Information

The family of John Henry Erkert III created this Life Tributes page to make it easy to share your memories.

Send flowers to the Erkert family.