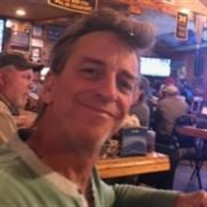 James "Jaimie" Astor Hodges, Jr., was born August 6, 1963 to James Astor Hodges, Sr., and Carolyn (Beavers) Hodges, at the Air Force Base Hospital in Myrtle Beach, South Carolina. He died unexpectedly on June 28, 2020. Jaimie grew up in Memphis Tennessee and following high school he followed in his father's footsteps by proudly serving in the military. He enlisted and served 4 years in the United States Army. After his military service, Jaimie obtained an Associates Degree and thereafter continued his education. He enjoyed his work in the environmental industry, most recently working in a supervisory capacity at a company that provided soil testing services. This job allowed him to travel throughout the United States, along with his long time companion, Valerie Ferrell. But home base was always at his momma's house in Arlington, Tennessee. Jaimie loved listening to music, traveling, animals, and his family. Jaimie is survived by his mother Carolyn Hodges, his sister Stephanie Joyner (and her husband James), little brother Mitchell Hodges (and his wife Samantha), 4 nephews, 1 niece, 1 great-niece, and his long time companion Valerie Ferrell. Jaimie will be dearly missed by his family and friends. There is no service planned at this time. The family would enjoy reading any comments or memories you would like to share here. The family is being assisted by James Sircy, and cared for by Jackie Fulford of Young Fulford Funeral Home and Crematory in Tallahassee, Florida. (850) 610-4444 YoungFulford.com

The family of James "Jaimie" Astor Hodges Jr. created this Life Tributes page to make it easy to share your memories.

Send flowers to the Hodges family.