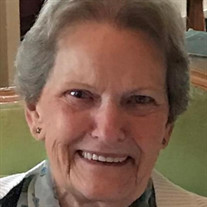 On the morning of April 5, 2020, Ida Kathryn Knotts peacefully passed at her granddaughter’s home in Tallahassee, Florida. She was 93. Ida was born, to Ralph and Florence Stephens in Indianapolis, Indiana. She was married to Herman “Gene” Knotts in 1945 and together they raised two children Jerry and Tom. She also had helped raised two stepchildren Ray and Sharon who are deceased. Ida retired from Methodist Hospital and up until last year would get together with a group of her friends from the hospital for lunch. Ida is preceded in death by her husband Herman, her mother and father, brother’s Roger, William, Ralph, Kenneth, a sister Laura and a great granddaughter Mirranda (Randee). She is survived by her sons Jerry and Tom; several grandchildren, Kate, Curt, Stephen, and Travis; great grandchildren Sam, Matt, Lyndsey, Gracie, Eve, Morgan and Cheyenne; and a great great grandson Whitt along with a sister-in-law Mary and several cousins, nieces and nephews. A celebration of life will be announced at a later date. Please return to this tribute page for future updates. The family is being assisted by James Sircy with arrangements, and cared for by Jackie Fulford with Young Fulford Funeral Home and Crematory, Tallahassee, Florida. (850) 610-4444 YoungFulford.com

On the morning of April 5, 2020, Ida Kathryn Knotts peacefully passed at her granddaughter&#8217;s home in Tallahassee, Florida. She was 93. Ida was born, to Ralph and Florence Stephens in Indianapolis, Indiana. She was married to Herman &#8220;Gene&#8221;... View Obituary & Service Information

The family of Ida K. Knotts created this Life Tributes page to make it easy to share your memories.

Send flowers to the Knotts family.