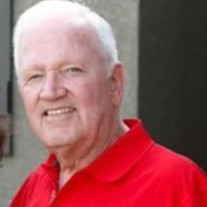 George Burton Kemple was born to John Raymond and Mabel Kemple in Las Vegas, Nevada on October 12, 1937. At the age of 83, George passed away on January 22, 2021. George was one of eight boys, who learned the value of hard work at an early age. At 12 years old, George got his first job plucking turkeys for five cents a turkey. Through his teen years he also was a dish washer, a cook, and newspaper printer. At the age of 17, George left home and joined the United States Navy. He proudly served for four years aboard the USS Wiltsie, as a signalman. After his military service, George began his telephone career. He started as a linesman's helper in Las Vegas, Nevada. He worked himself up into several different supervisory positions. His ability to motivate people and get things done served him well and resulted in him landing a position as the head of the entire state's telephone operations, in three different states. He rose to the position as CEO at Centel Corporation, and retired in 1992 as an Executive Vice President at corporate headquarters in Chicago, Illinois. He and his wife chose Tallahassee, Florida as their home upon his retirement. The source of George's greatest pleasures in life was his family. His wife, Shirley, was the love of his life and his constant companion. His children and grandchildren were also a source of great joy for George. He often bragged about them and their achievements to just about anyone who would listen. George also treasured the time he got to spend in Southern Utah, visiting with his brothers. He and Shirley would go for a month each time they visited his brothers. Together, they would all take short trips together: to Nevada to eat seafood; to Arizona where they would all buy lottery tickets; and countless other places where they made memories that have lasted a lifetime. George and Shirley enjoyed traveling together and visited places all over the world. Besides his wonderful career, George also did so many things that he was proud of: he attended Harvard University; he went on 32 cruises; he traveled to all 7 Continents; he met two United States Presidents; and he was Baptized in the Jordan River. But of all of George's many accomplishments, the one he liked to talk about most, was the time he spent in the United States Navy. George is survived by his loving wife, Shirley Kemple; his three sons Jeffery Kemple (and wife Dena), Joseph Kemple, and Kenneth Kemple (and his wife Rochelle); two daughters, Diane Underwood (and husband Lee), and Nicole Penn (and husband John); nine grandchildren, Matt Kemple, Brianna Kemple, Brett Kemple, Nicholas Underwood, Alex Underwood, George Penn, Ava Penn, Leo Penn, and Noella Kemple; and six brothers, Raymond Kemple, Clifford Kemple, James Kemple, Richard Kemple, Robert J. Kemple, and Howard Kemple. George was preceded in death by his parents, John Raymond and Mable Kemple; son George Burton Kemple, Jr.; daughter Leah Kemple; and brother Thomas Kemple. Due to COVID, a private family burial will take place at the Tallahassee National Cemetery. In lieu of flowers, the family requests that donations be made in honor of George to the Cystic Fibrosis Foundation at https://www.cff.org/give-today/ The family is being assisted by Skip Young and cared for by Jackie Fulford at Young Fulford Funeral Home and Crematory, Tallahassee, Florida. (850) 610-4444 YoungFulford.com

George Burton Kemple was born to John Raymond and Mabel Kemple in Las Vegas, Nevada on October 12, 1937. At the age of 83, George passed away on January 22, 2021. George was one of eight boys, who learned the value of hard work at an early... View Obituary & Service Information

The family of George Burton Kemple created this Life Tributes page to make it easy to share your memories.

Send flowers to the Kemple family.