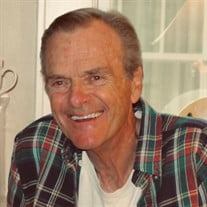 Gary Wayne Clark, 78, of Tallahassee, Florida, passed away on May 9, 2022. Ask different people about Gary Clark and you get many versions of the man. To his colleagues at the Associated Press, he was a well-dressed journalist and Chief of Bureau who wasn’t afraid to bring his acerbic, New England humor into the newsroom. He was a newsman, a mentor and a professional. No brown shoes allowed. To his kids, he was a quiet disciplinarian, a gentleman and someone who could, with a look, communicate his disappointment. He was also the dad who’d leave them guessing about what he’d make for breakfast. Maybe it was last night’s leftovers, or perhaps it was cake. For his wife Fay, he was her high school sweetheart, fellow golfer, travel companion and life partner. Gary couldn’t have achieved so much without her, and he knew it. And to his grandkids, he was the one who always had jellybeans in his pocket and was eager to watch a good cartoon when they came up to visit in Atlanta. As the longest-standing AP Chief of Bureau upon retirement in 2009, Gary was one of very few chiefs that headed four bureaus: Honolulu (1976-77), New Orleans (1977-82), Miami (1982-93), and Atlanta (1993-2009). He covered some of the nation’s most monumental stories during that time. In October 1977, he covered the plane crash that killed Lynyrd Skynyrd front man Ronnie Van Zant. As Cubans were fleeing to Florida in the 1980s, Gary was interviewing Fidel Castro in Cuba as one of the few American journalists allowed in the country. Gary covered the Challenger explosion in 1982, and the 1996 Olympic Park bombing. Gary Clark brought his precision and intellect as a journalist to most of his life outside the job. He instilled values of integrity, honesty and persistence to his kids Chadwick, Shannon and Jason. He was immensely proud of his family and intentionally dedicated downtime to Fay, his kids and later his grandkids. While his kids didn’t follow in his career footsteps, his first grandchild graduated from journalism school in 2016 with a job as a radio producer in Washington, D.C. After their first NPR segment aired, Victoria sent it to Gary and Fay. They received a long text the next day with detailed notes about how the interview could’ve gone better. (Pop’s probably editing this obituary, too, somewhere. I did my best to follow AP style.) Gary Wayne Clark – named by his mother after the prolific Western film actor John Wayne – was born on March 17, 1944 in Lynn, Mass. He grew up in Keene, N.H. and went to Furman University where he played basketball as a walk-on. When he realized Furman didn’t have a journalism school, he moved back home to Keene and attended Boston University by hitchhiking to class. They often stayed late to watch a Red Sox game from the cheap seats before returning home. He graduated as a student athlete on the golf team while still working 40 hours a week at the Keene Sentinel. Gary died at his home surrounded by his family on Monday, May 9, 2022. He is remembered and survived by his wife of 56 years Fay Gomarlo Clark; his children, Chadwick Wellington Clark and his wife Karen, Shannon Clark Whitley and her husband Mark, and Jason Gomarlo Clark; his sisters Donna Clark Miller and Janice Biasin-Hanson; his grandchildren, Victoria, Clark, Hanah, Maddy, Nathan, Camryn, Zachary and Lauren; and his many nieces and nephews. There will be a funeral mass celebrating his life at Blessed Sacrament Catholic Church in Tallahassee, Fla. on Wednesday, May 18 at 11:30 a.m. There will be a graveside service in Keene, N.H. this summer, date to be decided. In lieu of flowers, friends and family may send donations to the Alzheimer’s Project, Inc. in Tallahassee. The family is being assisted by James Sircy and Jackie Fulford of Young Fulford Funeral Home and Crematory, Tallahassee, Florida. 850.610.4444 YoungFulford.com

Gary Wayne Clark, 78, of Tallahassee, Florida, passed away on May 9, 2022. Ask different people about Gary Clark and you get many versions of the man. To his colleagues at the Associated Press, he was a well-dressed journalist and Chief of... View Obituary & Service Information

The family of Gary Wayne Clark created this Life Tributes page to make it easy to share your memories.

Gary Wayne Clark, 78, of Tallahassee, Florida, passed away on...

Send flowers to the Clark family.