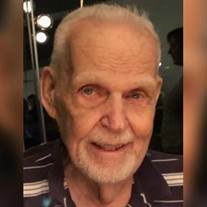 Ernest “Buck” Burkman, Jr. Husband, father, grandfather, great grandfather, friend, teacher, explorer, scholar and FSU professor emeritus Buck Burkman died Monday, Oct. 7. He was preceded in death one week earlier by the love of his life, Nancy Jean Burkman. The two shared 66 years of marriage, and the same birthday, three years apart. Buck turned 90 Friday, Oct. 4. Mere hours before his passing, Buck and his family were lifted with the condolences and fellowship of dear friends during a memorial visitation for sweet Nancy. This man’s heart of great logic and reason overflowed with love to completeness. He died peacefully in his sleep. Buck was born in Detroit Michigan. He was also preceded in death by his parents Ernest and Rose Burkman and brother George Burkman. He met and fell in love with fellow student Nancy Barron at Eastern Michigan University. They married in 1953 as both continued their education and he graduated with his B.S. degree. Buck began graduate school at the University of Michigan (UM) and was then inducted into the U.S. Army, becoming a P.I.O. at Camp Carson Army Hospital in Colorado Springs, Co. Upon discharge, he completed two master’s degrees and then continued studies toward a doctoral degree at UM, while teaching high school science. Dr. J. Stanley Marshall, head of the FSU department of science education called Buck about a position. Buck joined FSU’s faculty in 1960 and remained in the College of Education for 33 years. In 1963, FSU received a grant to assist in setting up a national high school of science in Ankara, Turkey and Buck became the project’s associate director, along with his regular FSU duties. This experience gave him a taste of working in foreign cultures and a lust for travel. He also gained experience working with funding agencies supporting large-scale projects aimed at improving schools. In 1966 Buck received a multi-million dollar grant to develop a ground-breaking approach to teaching science in middle schools. The ISCS project resulted in a system for grades 7-9 featuring individualized instruction and hands-on activities. At its peak, ISCS was adopted by over 20% of US middle schools and adapted for use in more than twenty foreign countries. A few years later Buck secured another major grant. The ISIS project involved U.S. scientists, teachers and educators focusing on practical applications of science and experiential activities that was used by more than 4,000 high schools across the U.S. and Canada. A dedicated educator, Buck was proud of the many students completing doctoral degrees under his direction and of his numerous advisees who earned master’s degrees. During his career at FSU, Buck presented at more than 100 professional meetings around the world and published more than 30 articles, book chapters and books. He traveled extensively to lecture, provide training and lead workshops related to improving schools. During retirement, Buck started the Educational Services Consortium, Inc. and served as the president and chairman of the board. He continued as a consultant to other countries, mostly in Africa, to develop their educational systems. Buck and Nancy traveled the world for years, visiting more than 75 countries, and many off-beat locations including Antarctica, Mongolia, Tibet, and the Galapagos Islands. Experiences included flying around the world; climbing an active New Zealand volcano; driving from Turkey across Syria, Lebanon and Jordan to Jerusalem; getting stuck in the North Polar Ice Cap; riding the Trans-Siberian Railroad from Moscow to Beijing; and enjoying numerous self-guided African safaris. Buck is survived by his loving family: daughters Laurie Marshall (David), Linda Charity, Jan Dobson (Bill), and Patty Lang (Chuck); grand-children Kimberly Marshall (Adam), David Marshall II, Michael and Nick Dobson, Charles Charity, Charlie, Jonathan and Collin Lang; and great-grandson Simon Wright. A memorial service for Buck, and his beloved Nancy will be held Monday, Oct. 14, 9 a.m. at Tallahassee National Cemetery, 5015 Apalachee Pkwy, Tallahassee. In honor of Buck and his passion for learning, please consider a donation in his name to the FSU Foundation (325 W. College Ave, Tallahassee 32302 or give.fsu.edu) to benefit the Instructional Systems Student Support Fund (F0731). The family is being assisted by Skip Young and cared for by Jackie Fulford

The family of Ernest "Buck" Burkman Jr. created this Life Tributes page to make it easy to share your memories.

Send flowers to the Burkman family.