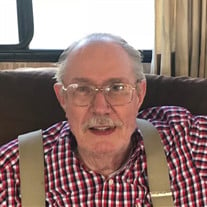 EDWARD JENNINGS TRIBBLE August 10, 1943-August 18, 2019 Ed was born August 10, 1943, at the hospital at NAS Fort Lauderdale, Florida, to Dr. Charles E. Tribble and Ann Jennings Tribble. He moved to DeLand, Florida, with his mother and two older brothers when his father was ordered to the South Pacific in early 1944 as a surgeon aboard the hospital ship U.S.S. Solace. He lived in Deland until leaving for college, attending Wake Forest University, Louisiana Tech, and Stetson University, eventually receiving his BA and MA in history from Stetson in 1968. He attained a second master’s degree (in Library Science) from Florida State University in 1969. He worked as a librarian at the University of the South in Sewanee, TN, 1969-1973, and returned to Tallahassee in 1973 as the first professional archivist hired by the Florida State Archives, eventually rising to the position of State Archivist. He left the Archives in 1985 to co-found Florida Information Associates, Inc., an information retrieval service, where he worked until his retirement. Ed was also a gifted artist, creating whimsical flying machines out of metal, found objects and wire, and sketching fanciful pen-and-ink drawings of the people and objects that inhabited his unique imagination. Ed is survived by his wife of 37 years, Connie Beane; his brother Zachary (Nancy) of DeLand; three nephews, Grant (Kristine), Adam (Kendra), and Benjamin; and five grand-nephews and -nieces: Samantha, Katie, Nathan, Natalie and Zachary. He was pre-deceased by his parents, an older brother Samuel G., and a beloved nephew, Charlie. Ed requested a green burial, which will take place privately in the Glendale Nature Preserve near DeFuniak Springs on August 24. No formal funeral is planned, but memorial gatherings are being arranged in Tallahassee and in DeLand at dates to be determined later. In lieu of flowers, tax deductible contributions in his honor may be made to: Neighbor-to-Neighbor in the Nenes, 1525 Heechee Nene, Tallahassee, FL 32301, or via their website, AginginNeneland.org. Ed believed strongly in the organization’s mission of providing information and assistance to seniors to enable them stay in their own homes as long as possible. The family is being assisted by Skip Young and Jackie Fulford.

The family of Edward Tribble created this Life Tributes page to make it easy to share your memories.

Send flowers to the Tribble family.