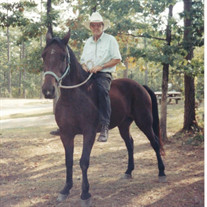 Doyle Edward Bullock was born on October 3, 1938, in Lufkin, Texas, to Henry Doyle Bullock and Eswa Violet (Sessions) Bullock. From a young age Doyle loved the outdoors. He loved to fish, deer hunt, horseback ride, raise horses, and cattle. Doyle was a true animal lover and an outdoors man. Doyle had a diverse career, he was a Minister in the Church of Christ for many years, then he became a School Teacher and earned his Master’s Degree in Education. Doyle loved children and he became very involved with his students. Many students said Mr. Bullock was their favorite teacher. He was tough but fair and they loved and respected him. Later in his career, Doyle started truck driving for Walmart. He loved being on the open road and loved seeing the country-side firsthand. Doyle earned many safe driving awards during his career as a truck driver. He was very proud to be an American, a Texan, and believed he lived in the greatest country on earth. Doyle was quite a character and had a great sense of humor. There was never a dull moment when Doyle was around, and he always had a smile on his face. Doyle was a true cowboy and a gentleman. Daily he could be seen in his favorite cowboy hat, boots, western shirt, jeans, and a big ole’ belt buckle. He fit right in in Missouri and Arkansas where he lived and worked on his farm and raised cattle, horses, and gaited mules. He loved to trail ride with his beautiful, faithful, Tennessee Walker horse, Jake. Doyle would always say “There is nothing better for the inside of a man, than being outside on a horse.” (A twist from a quote from Winston Churchill, that suited him well). Lastly and most importantly Doyle had a love for the Lord and a desire to follow him. Doyle went to be with his Lord and Savior Jesus Christ on April 27, 2022, and is greatly missed. Doyle Edward Bullock is survived by his loving daughters, Marlinda Bullock, and Mrs. Karesa Mōpua Cann; and beloved sister Dixie Goolsby. The family is being assisted by James Sircy and Jackie Fulford of Young Fulford Funeral Home and Crematory, Tallahassee, FL 32303. 850.610.4444 YoungFulford.com

The family of Doyle Edward Bullock created this Life Tributes page to make it easy to share your memories.

Send flowers to the Bullock family.