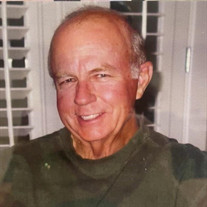 Dennett I. Rainey, Jr, passed away Tuesday, January 5, 2021 after a brief illness. He was born October 25, 1937 in Tallahassee, Florida, the son of Dr. D. I. Rainey, Sr. and Mrs. Helen Parker Rainey. Dennett attended Leon County elementary schools and Leon High School, graduating in 1955. While in high school he was active in the Boy Scouts, earning an Eagle Scout designation. Attending the University of Florida, Dennett was a member of Sigma Chi Fraternity and graduated with his B.S. in Banking and Finance. He also furthered his education with a Masters’ degree in Banking from Louisiana State University. Dennett began his banking career at the Lewis State Bank where he achieved the title of Director and Trust Officer. He later became Director and Executive Vice President of Florida State Bank and Director of Sun Federal Savings. Being an entrepreneur at heart, Dennett pursued a second career in real estate and development, forming Rainey Investment Properties. The fruits of his work can be seen in many beautiful Tallahassee neighborhoods, including residential subdivisions and apartment complexes. Out of his passion for health and well-being, Dennett founded the Plantation Club fitness center, which later became Premier Fitness. He also was a founding member of St. Teresa Episcopal Church in Wakulla County. In his later years, Dennett fulfilled his life-long dream of living in a rustic cabin, which he designed, on a pristine lake in Wakulla County. Dennett is survived by his children, Dr. Russ Rainey (wife, Dr. Cheri) Allison Rainey Wise (husband, Phil), his grandchildren, Rainey Wise and James Kassaga Arinaitwe (wife Daphine), his great-grandchild, Russell Siima Arinaitwe, his children’s mother, Judy Culbreath, and his nephew, R. Bartow Rainey, Jr. He was preceded in death by his brother, R. Bartow Rainey, Sr. Due to the pandemic, a private burial service will be held at Oakland Cemetery. There will be a full celebration of Dennett’s life at a later time. In lieu of flowers, please consider a contribution to a charity of your choice in his honor. Skip Young and Jackie Fulford of Young Fulford Funeral Home and Crematory in Tallahassee (850) 610-4444 are assisting the family with funeral arrangements.

The family of Dennett Isaiah Rainey Jr. created this Life Tributes page to make it easy to share your memories.

Send flowers to the Rainey family.