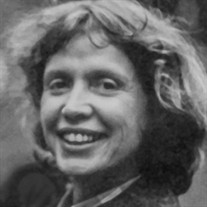 Christine Pauline Kaserer Grow (Christl) died on Feb. 15, 2021, surrounded by the loving care of her husband and two sons, after a relatively short, intense negotiation with pancreatic cancer. Due to the pandemic, no memorial service is currently planned. Christl was born June 26, 1944 in Vienna, Austria, to Robert Josef Maria Kaserer and Cecilia Kurzidim Kaserer, on a day in World War II when Allied planes bombed the outskirts of the city, in the midst of civilians, as she later put it, made crazy by their suffering. After coming to the U.S. with her first husband, James Gould, Jr., she graduated from California State University in Sacramento and later received a master's in education from Florida State University. Christl was a devoted mother, wife, daughter, friend, educator, and artist. She taught classes for nearly all ages from preschool through early college, including at Full Flower School, The Magnolia School, Hartsfield preschool, the Tallahassee Junior Museum, and a decade as a reading specialist at Tallahassee Community College. She ran a classroom with the kind of order that supports creative learning. She was a gifted artist. Her art studio in Railroad Square was a symphony of color. Her final painting, "Summer" -- based on her studies of the clear water at Wakulla Springs in the early 1980s -- hangs above the reception desk in the Hyatt Hotel at Railroad Square in Tallahassee. Christl also kept beautiful gardens at her home filled with flowers, fruit trees, and vegetables. Her art and her gardens both reflected her passionate, free spirit. Christl was a city girl surrounded by the art and music of one of the world's great cultural centers who grew up loving nature -- the subject of most of her paintings. She became immersed in the beauty of natural Florida. In addition, she pursued personal and spiritual development all of her life, from an appreciative early experience in Catholic school through yoga, dance, meditation, qigong, holistic health, and, later, esoteric studies, beginning with fellow Austrian Rudolf Steiner. She loved bugs and was unafraid of spiders. She was preceded in death by her mother and father. Survivors include her husband, Gerald Owen Grow, of Tallahassee, Fla.; sons Ariel Grow (Claudia), of Houston, Texas, and Stefan Grow (Tina), of Monticello, Fla.; a sister, Gabriel John, and a brother, Karl Schober, of Vienna, Austria; two grandsons, a niece and grandniece, many cousins, friends, fellow artists and educators. Christl was loved by so many and will be dearly missed. In lieu of flowers, the family requests that donations be made to Big Bend Hospice, Tallahassee, Fla. The Family is being assisted by James Sircy and cared for by Jackie Fulford of Young Fulford Funeral Home and Crematory. 850-610-4444 youngfulford.com

Christine Pauline Kaserer Grow (Christl) died on Feb. 15, 2021, surrounded by the loving care of her husband and two sons, after a relatively short, intense negotiation with pancreatic cancer. Due to the pandemic, no memorial service is currently... View Obituary & Service Information

The family of Christine Kaserer Grow created this Life Tributes page to make it easy to share your memories.

Send flowers to the Grow family.