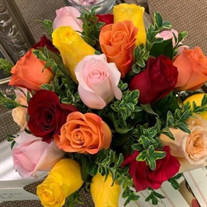 Charlotte Ann Hartsfield Cantrell, was born on September 28, 1957 in Quincy, Florida, to Charles Hartsfield and Patricia (Califf) Hartsfield. She passed away on July 18, 2021. While attending Raa Middle School, Charlotte became a life-long member of the "Green Street Gang" which had 10 official members, only one of which was a boy. Unlike the "gangs" of today, the Green Street Gang was a group of friends who all lived either on Green Street, or on another street very close by. A coach at Raa Middle School started referring to the group of friends this way, not likely knowing that some fifty years later, they would all remain close friends that referred to themselves proudly as the "Green Street Gang!" Charlotte, herself, not only grew up in a home on Green Street, she actually lived there in the same home right up until her passing. Following Raa, Charlotte attended Leon High School and was a proud member of the graduating class of 1975. After High School, Charlotte engaged in a 25 year career of teaching preschool. She first taught at North Florida Christian School, and then at Seminole Baptist Church. In addition to her love of teaching children, Charlotte has a passion for her art. She had many artistic talents, including painting, sewing, making original greeting cards, writing children's stories, and more. Her friends talk about how talented she was, from an early age. Right up until her death, Charlotte continued to organize gatherings for the Green Street Gang, even though members had moved on to other parts of the United States. She kept the group together, communicating and staying close and involved in knowing what was going on in each other's lives. One of the members recalls how she just received a card in the mail from Charlotte. She commented that this was just the way Charlotte was; always thinking of somebody else and reaching out to them to let them know how special they were to her. Charlotte is survived by her two sons, Jimmy Cantrell and Casey Cantrell; the father of her son's, Marc Cantrell; and siblings John Maloy and Cherry Maloy. She was preceded in death by her parents, Charles and Patricia Hartsfield. The Family, and the remaining members of the Green Street Gang, are discussing a possible gathering to honor the memory of Charlotte. This website will be updated to include this information once the plans are finalized. Charlotte will be missed terribly by her family, the remaining members of the Green Street Gang, and all others who were blessed to be her friend. The impact she has made on these lives and the memories they made together, however, will forever remain in their hearts. A Celebration of the Life of Charlotte Hartsfield Cantrell will be held on Sunday, August 15, 2021 from 6:00 PM - 8:00 PM, at the Lake Jackson Community Center, located at 3840 N. Monroe Street, Suite 301, Tallahassee, FL. Family and Friends of Charlotte are welcome to attend. The family is being assisted by Skip Young and cared for by Jackie Fulford of Young Fulford Funeral Home and Crematory, Tallahassee, Florida. 850.610.4444 YoungFulford.com

The family of Charlotte Ann Cantrell created this Life Tributes page to make it easy to share your memories.

Send flowers to the Cantrell family.