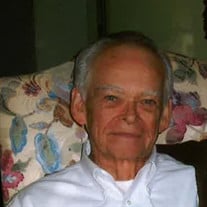 Dr. Charles Evans Noyes, Jr., “Chuck”, 94, of Orlando, Florida, passed away peacefully on June 13, 2021 in Tallahassee, Florida. Born in Lakeland, Florida on August 19, 1926 to Katherine Mae Beardslee Noyes and Charles Evans Noyes, he moved with his family to Owosso, Michigan, and later to Williamsport, Pennsylvania where he spent his formative years. Initially attending the University of Notre Dame through the Naval ROTC program, he graduated from the University of Pennsylvania and then Hahnemann Medical College (now Drexel) in 1953. After serving as a captain and flight surgeon in the Air Force, he moved to Central Florida where he established the first general physician private practice in Maitland in 1956. He remained in medicine for six decades, eventually retiring from Rosen Hotels & Resorts in 2013 at the age of 86. He relished his work and was beloved by patients and colleagues alike for his cheerful disposition and expert diagnostic skills. A car aficionado (American-made only, please), he was an equal opportunity dog and cat lover, a frustrated golfer and an avid football fan, with his favorite teams being the Penn State Nittany Lions and the Pittsburgh Steelers. With an ever-present twinkle in his eye, he was always eager to hear or share a good joke. Most importantly, he loved our Lord and Savior Jesus Christ and was a member of Faith Baptist Church of Orlando for many years. Chuck lived in Orlando until October 2020 when he moved to Tallahassee. He was preceded in death by his parents and his eldest daughter Nancy Elizabeth Noyes. He is survived by his sister Katherine Noyes Campbell of Guilford, Connecticut, and his daughters Terri Noyes Dombroski (Thomas) of Tampa, and Alison Noyes Thomas (William) of Tallahassee, and five grandchildren - Anna Dombroski Walker, Noah Dombroski, Leah Dombroski, William George Thomas and Charles Evans Thomas. A service for the family will be held at the National Cemetery in Tallahassee. In lieu of flowers, please consider donating to Big Bend Hospice or other hospice organization of your choice. The family is being assisted by Skip Young and Jackie Fulford of Young Fulford Funeral Home and Crematory, Tallahassee, Florida. (850) 610-4444 YoungFulford.com

The family of Charles E Noyes Jr. created this Life Tributes page to make it easy to share your memories.

Send flowers to the Noyes family.