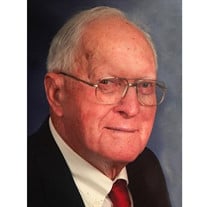 Charles William "Bill" Hubbard, Sr., 96, passed away peacefully following a brief illness on Saturday, September 19, 2020, at the home of his son and daughter-in-law in Tallahassee, Fla. A graveside service will be held for family and friends at the Old Mt. Pleasant Cemetery to celebrate Bill’s life. A later service will be held at the Tallahassee National Cemetery to honor his service to the nation in World War II. Mr. Hubbard was born on February 1, 1924 in Mount Pleasant, Fla. to Archibald N. and Rosa Beggs Hubbard. He was a life-long resident of Gadsden County, Fla. where he built his career as a tobacco farm superintendent working with the American Sumatra Tobacco Company. He was preceded in death by his parents; by his loving wife of 31 years, Shirley Ruby Laing Hubbard of Chattahoochee, Fla.; by his dear companion and friend of 25 years, Dorothy Barker of Quincy, Fla.; by a brother, Archie B. Hubbard of Quincy, Fla.; and by two sisters; Jean Fair Hubbard Simpson of Columbus, Ga. and Rachel Parke Hubbard Scot of Mt. Pleasant, Fla. Survivors include his wife Claire Taylor Hubbard, of Charlotte, N.C.; one son, Charles William "Charlie" Hubbard, Jr. (Susan) of Tallahassee, Fla.; one daughter, Alma Parke Hubbard, of Tuscumbia, Ala.; Dorothy Barker’s daughter, D. Rosanne Barker, of Tallahassee, Fla.; five grandchildren; eight great grandchildren; two great great grandchildren and several nieces and nephews. Bill was inducted into the U.S. Army at Camp Blanding, Fla. in February 1943 and honorably discharged in March of 1946 as a technical corporal (TEC-5). For all of his service in the European Theater of operations, he served with the 68th Gun Battalion, Headquarters Battery, of the 7th Army commanded by Lt. General Alexander “Sandy” Patch. As part of Patch’s army, in August 1944, Bill landed in Southern France in a massive amphibious assault known as Operation Dragoon, a follow-up to the D-Day invasion that previous June. The operation liberated most of Southern France in only four weeks. The Allied advance soon led to the liberation of the notorious Dachau concentration camp followed by the collapse of all German resistance. For his service, Bill was awarded numerous medals and honors including the Eastern Campaign Medal with two Bronze Stars. Returned to peacetime in his beloved hometown of Mt. Pleasant, Bill devoted his free time to his family and many friends. He became an avid gardener whose intense love for growing delicious vegetables was matched by his love for perennially sharing his gardens’ bounty with family, friends and neighbors. When he wasn’t in his garden, he typically could be found reading history books and westerns; listening to the Big Band sounds of Glen Miller, or, most every Friday night, playing canasta with friends. The family thanks the staff of Big Bend Hospice and the Veterans Administration of Tallahassee for their care and compassion. In lieu of flowers, the family requests that memorial donations be made to Glen Julia United Methodist Church, where Bill was a life-long member. Donations to the church’s building fund should be sent to Ms. Sharlyn Kelly, 11375 Blue Star Hwy., Quincy, Florida 32352. Young-Fulford Funeral Home of Tallahassee, Fla. (850-610-4444) is in charge of arrangements. The Family is being cared for by Skip Young and Jackie Fulford.

Charles William "Bill" Hubbard, Sr., 96, passed away peacefully following a brief illness on Saturday, September 19, 2020, at the home of his son and daughter-in-law in Tallahassee, Fla. A graveside service will be held for family and friends... View Obituary & Service Information

This Life Tributes page was created to make it easy to share your memories..

Send flowers to the Hubbard family.