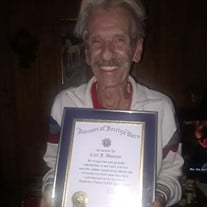 Carl Joaquin Duncan, 78, of Tallahassee went into eternal rest on July 13, 2021, at home with family by his side. Carl was born to Norman Howard Duncan and Dolores (Drummond) Duncan on January 2, 1943, in Newark, New Jersey. Carl proudly served his country in the United States Military. He first entered the United States Air Force and thereafter transferred to the United States Army, due to a medical issue that prevented him from being a pilot. Carl's time in the military was during the Vietnam War, where Carl not only served, but which led to him receiving numerous honors and medals including the National Defense Service Medal, a Combat Infantry Badge, a Good Conduct Medal, the Vietnam Service Medal, a Vietnam Campaign Medal, 2 overseas Bars, the RVN Cross of Gallantry; and he was also a Vietnam Purple Heart recipient. In addition to his very honorable military service, Mr. Duncan obtained his Ph.D. and worked throughout his career as a drug counselor and a teacher. The assistance and guidance he gave in his lifetime, no doubt, helped countless individuals. Carl is survived by his loving wife Linda Burke, his daughter Wendy Moore (and husband Dell); sister Sharon Moore; step children Tonya Watson (and husband Justin Lehman), Thresa Howard, and Christopher Organ; grandchildren Savannah Payne (and husband Tyler), Kaitlyn Barbuscio (and husband Robert), Abigail Moore, Becca Moore, Lily Howard, Jonathan Howard, Thomas Watson, Mary Watson, and Joseph Watson, Christopher Organ, Jr., Brittany Powell, and Joshua Organ; and great granddaughter Amelia Payne. A Memorial Service with Full Military Honors will be held at the Tallahassee National Cemetery, on Friday, July 30th, 2021 at 2:00 PM. Mr. Duncan will then be interred in the Columbarium located at the cemetery. All friends, family, colleagues and others who wish to pay their respects are invited to attend. The family is being assisted by Skip Young and James Sircy, and cared for by Jackie Fulford of Young Fulford Funeral Home and Crematory, Tallahassee, Florida. (850) 610-4444 YoungFulford.com

Carl Joaquin Duncan, 78, of Tallahassee went into eternal rest on July 13, 2021, at home with family by his side. Carl was born to Norman Howard Duncan and Dolores (Drummond) Duncan on January 2, 1943, in Newark, New Jersey. Carl proudly... View Obituary & Service Information

The family of Carl Joaquin Duncan created this Life Tributes page to make it easy to share your memories.

Send flowers to the Duncan family.