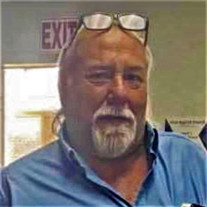 Elbert “Brent” Ray, 57, passed away unexpectedly at his home on August 22, 2021. He was born February 21, 1964, in Central City, KY to Willard and Betty (Vick) Ray. After high school, Brent moved to Tallahassee, Florida. He attended Thomasville Technical College where he became a Master Diesel Technician. For the past 10 years, he worked at Ward International Trucks. Brent was truly one of kind, he was both stubborn and loving. His family meant more to him than anything else in the world, something he often made sure to be known. He was beyond proud of his daughter, Megan’s successes and bragged about her often to anyone who would listen. Brent enjoyed many things including watching westerns, playing poker, boating on Lake Talquin, and woods riding with his 2 sons. Brent is predeceased by his parents, Willard and Betty Ray, stepfather Bob Hulse, Uncle Larry Ray, and both maternal and paternal grandparents. He is survived by his wife of 18 years, Catherine; his only daughter, Megan Ray; 2 sons, Garrett and Robbie Langston; 1 granddaughter, Alicia Langston; and 2 grandsons; Trevor and Austin Langston; his sister, Carla (Tim) Vincent; his brother, David (Tanya) Ray; and many nieces, nephews, and friends. Prior to his passing, Brent voiced he wanted to be cremated as such a celebration of his life will be held on October 9, 2021, at 2:00pm at Lake Talquin to spread his ashes per his wishes. The family requests anyone in attendance to please bring a covered dish and any stories of Brent to share. Make sure to bring your own chairs. In lieu of flowers and in honor of Brent’s beloved Rottweiler, Max, the family request donations to be made to the Florida Rottweiler Rescue Ranch and Sanctuary. Donations can be made on their website at https://flrottweilerrescueranch.org/donate/. Their email and PayPal are [email protected] . The family is being assisted by Skip Young and Jackie Fulford of Young Fulford Funeral Home and Crematory, Tallahassee, Florida. 850.610.4444 YoungFulford.com

The family of Brent Ray created this Life Tributes page to make it easy to share your memories.

Elbert “Brent” Ray, 57, passed away unexpectedly at his home...

Send flowers to the Ray family.