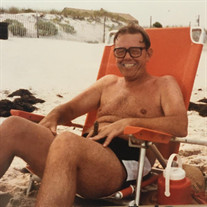 Barthold Kuno Schotte, II, 89, of Tallahassee, FL, passed away on October 10, 2021. Barthold “Bart” Kuno Schotte was born in Ossining NY, on April 14, 1932. Bart met the love of his life Sylvia Chiulli, in Ossining High School. They were married July 6, 1952 after a very brief courtship (love at first sight). Very soon after marriage Bart left for the Korean War, after being drafted in 1952. He served two years of active duty in Korea as an MP. Bart and Sylvia adopted their only son (Lance Edward) in 1962. ln 1968, they left Ossining and bought a home in the suburbs of Philadelphia - Willingboro, NJ - where he and Sylvia spent the next 45 years of their lives. In 1977 they welcomed their only grandchild, Danielle Hauberger. Bart worked as a rate analyst for the old Pennsylvania Railroad for his entire career (39 years) and retired in 1990. During their lives in NJ, Bart and Sylvia enjoyed vacationing at Long Beach Island, Seaside Heights, and of course, as many times as possible, in the low-stakes slot machine pits of Atlantic City (mostly Sylvia, we think). After retirement Bart and Sylvia also enjoyed many cruises with family - from Panama to Bermuda. Bart also loved golfing, and mowing his grass every Saturday (believe it or not), and rewarding himself with a cold beer, or two, or more, when finished. Bart kept in touch with friends he made as a teenager at Ossining High School, and Bart and Sylvia attended (nearly) every High School reunion for 65 years! In 2013 Bart and Sylvia moved to Tallahassee FL, where they moved in to Westminster Oaks retirement community. Sylvia was Bart's life - wherever she went he went as well. They went out to eat multiple times a week - and saw a film together at least once a week, for years and years. After Bart's wife Sylvia passed away in 2017, Bart was able to devote himself exclusively to pursuing his true passions: watching his treasured Yankee ballgames on TV (cursing a lot, if they deserved it), and reading the daily newspapers (mostly the sports sections). Bart was a kind, outgoing, friendly man who left a pleasant impression on everyone he met. He greeted everyone with a smile and a quick (or not) chat, loved getting in his car every morning for a leisurely shopping excursion to Publix (for stuff he may or may not have needed), and chatting with the check-out and shelf-stocking ladies. Bart had a kind word for everyone he met, and will be missed and lovingly remembered as a gentle, sweet soul by everyone who knew and met him. Information regarding his Full Military Honors Service at the Tallahassee National Cemetery is forthcoming. The family is being assisted by James Sircy and Jackie Fulford of Young Fulford Funeral Home and Crematory, Tallahassee, FL. 850.610.4444 YoungFulford.com

The family of BARTHOLD KUNO SCHOTTE created this Life Tributes page to make it easy to share your memories.

Send flowers to the SCHOTTE family.