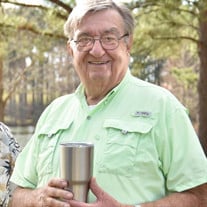 Antoine (Tony) Marie de Sercey, age 88, of Monticello, passed away March 27, 2021 at the Big Bend Hospice House. He was born February 17, 1933 in Normandy, France, the son of Felix Maurice Marie Laurent de Sercey and Henriette Ellen Emilie Brolemann de Sercey. Tony migrated to Wilmington, DE with his mother in 1947 after WWII. He served in the Army as a PFC. In 1958 he moved to Miccosukee, Florida where he raised Charolais cattle and hay on the family farm. Tony eventually settled in Lloyd, Florida where he and Isabelle raised their 6 children. He is preceded by his Father, Laurent de Sercey; Mother, Ellen Brolemann de Sercey; brothers, Paul de Sercey and Claude de Sercey. He is survived by his wife, Isabelle de Vives de Sercey; brother, Patrick de Sercey; his children, Hubert; Bruno (Lisa); Betsy (Mack); Dominique; Patricia (Eric); and Nicholas (Amy) along with his 7 grandchildren Michelle, Jessica, Tony, Tristan, Sarah, Hans, Elizabeth, Ethan and 5 great grandchildren, Savannah, Mackenzie, Sercey, Ari, and Sophia. Tony was an avid hunter and hunted for many years with Tools Hammock Hunting Club. It was there where he enjoyed the most being a southern Frenchman. He was an honorary member of the Sons of Confederate Veterans. Visitation is Wednesday, March 31, 5-7 p.m. at Tony and Isabelle’s home. A funeral Mass will be held Saturday, April 17 at 10:00 a.m. at St. Margaret’s Catholic Church in Monticello, Florida. In lieu of flowers donations can be made in Tony’s honor to Big Bend Hospice/Dozier House. The family is being assisted by James Sircy and Jackie Fulford of Young Fulford Funeral Home, Tallahassee, Florida. (850) 610-4444 YoungFulford.com

The family of Antoine "Tony" Marie de Sercey created this Life Tributes page to make it easy to share your memories.