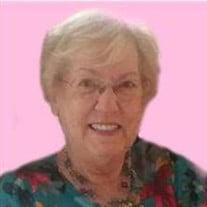 Ann Christine “Chris” Fain Walker, age 84, of Tallahassee Florida died on Monday, April 6th after a long illness. Born in Dale County Alabama in 1936, she was the only child of Albert Oneal Fain and Blondell Lenora Matthews Fain. She was a graduate of Bay County High School, class of 1954, Gulf Coast Community College, and University of West Florida. She became an elementary teacher specializing in teaching children with learning disabilities. In Panama City, she taught at Oakland Terrace and Lucille Moore Elementary Schools. After Chris moved to Tallahassee in 1987 to be closer to her grandchildren, she taught at Kate Sullivan and Astoria Park, retiring in 2001. Chris loved to read and was happy when a library opened close to her home. She loved to travel with her family and friends, visited all 50 states, and took cruises to ports in Europe, the Caribbean, South America, Canada, and Alaska, with quick getaways to Biloxi. She was a member of the Tally Ho Card Club, where she was wickedly good at playing Canasta. The love of her life was her family. She is survived by her daughter, Debra Walker Flemming (Hillar Kalda), Tallahassee, and sons David Walker (Cyndee Walker), Panama City, and Dennis Walker, Corpus Christi, Texas; eight grandchildren Ryan Flemming (Rachel), Patrick Flemming (Hannah), Kevin and Kate Flemming, Liz and Dean Walker, Neal and Matthew Walker (Courtney); step-grandchildren Caitlyn Kalda, Emily Kalda, Jacob Gates and Alexander Lawrence; great grandchildren- Eleanor and Georgiana Flemming, Sadie Flemming, Jillian Davis and Sammie McCusker, James, Lily and Aaron Walker, and Anderson Walker; daughter-in-law Ruth Walker, and Chris’ former husband and his wife Jim and Nancy Walker (Panama City). In lieu of flowers, donations should be made to Leon County Public Library or to your local public library. The family was assisted by James Sircy and cared for by Margaux Whitefield of Young Fulford Funeral Home and Crematory. A celebration of life will be held in the summer. 850-610-4444 YoungFulford.com

The family of Ann Christine Walker created this Life Tributes page to make it easy to share your memories.